What is Nirvana and Why Next Step to Nirvana?

Nirvana is the ultimate goal of all three major Indian religions. It is a state of enlightenment, awakening, and peace free from suffering (and from rebirth, more on that later). I see Nirvana not as a destination but believe that every step we take carries with it the potential for Nirvana – acting as an enlightened being with peace, joy, kindness and love. And hence, Next Step to Nirvana.

Nirvana is the ultimate, aspirational goal of the three major Indian religions: Hinduism, Buddhism, and Jainism. All three religions share the common belief of rebirth, karma gets sorted out through a series of births, actions, and consequences until all the debits and credits are sorted and one gets liberated from repeated rebirth in the profane world or samskara. Thus freed, it is the space of peace, joy, and freedom from suffering that is uniquely of the world.

This manifests differently in different religions.

In Hinduism, Nirvana or moksha, is salvation from rebirth because the small or individual soul/True Self of the Individual (Atman) unites with or realizes the union with the big soul/Ultimate Reality (Brahman). Most Hindu philosophies do not believe in eternal damnation. The idea is that it may take even several millions of rebirths, but all souls will eventually reach moksha or nirvana. I was raised in the Advaita Vedanta tradition (Non-dualism) in which the belief is that we are not separate, and realization of this identity is the key to nirvana or Satchitananda (ultimate bliss that comes out of this knowledge).

Even English poets were not immune to this desire to compress the space-time continuum that separates us. William Blake wrote in his Auguries of Innocence,

“To see a World in a Grain of Sand

And a Heaven in a Wild Flower,

Hold Infinity in the palm of your hand

And Eternity in an hour.”

My understanding of Dvaita Vedanta is very elementary but the idea is that Jeevatman (individual soul) and Paramatman (god) occupy two different realities. Individual souls are eternally dependent on the universal soul and realization of this truth is how one attains liberation. There is no way to be an atheist in this tradition!

I don’t think any religion is immune from bad behaviors. See the Buddhist led genocide of my people (Tamils)and Muslims in Sri Lanka and the Rohingya in Myanmar. Or the Hindu violence against Buddhism in ancient India.

What is my idea of Nirvana?

I have constructed my own lived in definition of Nirvana by taking a bit of each of these traditions and from naturalistic traditions such as indigenous wisdom.

As an atheist/agnostic/non-believer, I don’t know or care much about rebirths and next life.

I care very much about Karma. Karma in this lifetime. Karma as a theory of action. Actions have consequences even if there is no afterlife. Not like us getting rewarded for good deeds with a winning lottery ticket or our enemies or frenemies getting punished for their bad deeds. All of karma and the effects of it is in our own inner struggle with good and evil. If you goal is to practice intentional, conscious, aware, and self-led ethical behavior, then we must contend within us and guard against our own worst impulses to violate our own values and norms.

The realization that we are realization we are all interdependent and connected parts of life as a whole is nirvana for me. That understanding behooves us to cultivate a broader and more expansive identity and a more expansive moral framework. That we are all one means we erase ego-led, tribe-led, species-led boundaries that lead to conflict and violence. Any attachment to divisive identities and boundaries carries potential for harm and violence and takes us away the truth – that we are all one. To me, this realization is enlightenment or nirvana. Ahimsa or Non-violence is a key tenet that I attempt to use to guide my life. My parenting style was and is non-violent – in speech, thoughts and deeds.

One in Many and many in one.  It is a moment by moment awareness and can slip through our fingers if we don’t tend to it. This requires practice with diligence. That doesn’t stop like a train that arrived at the station or the destination. Every step we take, every moment we enter alive is an opportunity for Nirvana. Our Next Step to Nirvana. I took that name as a reminder to self.

On a side note, Nirvanam in my language (Tamil) literally translates to nakedness or nudity. I take it to mean free of ego, free of pretense, free of boundaries. 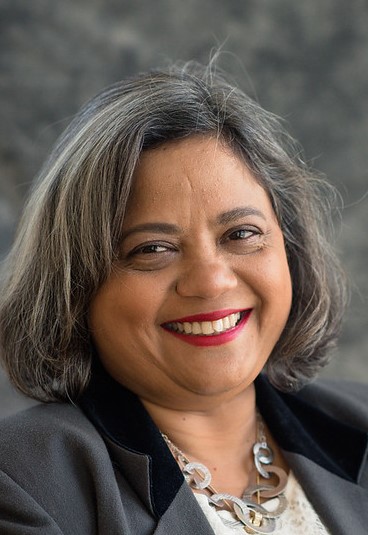 My research, practice, and teaching is centered on radical change for a better world – both outer and inner worlds. Radical change involves challenging the taken-for-granted fundamental assumptions about our mental models, organizational priorities and social systems. I use mindfulness and contemplative engagement as a methodology for generative change. I am a professor at the New School in New York City.